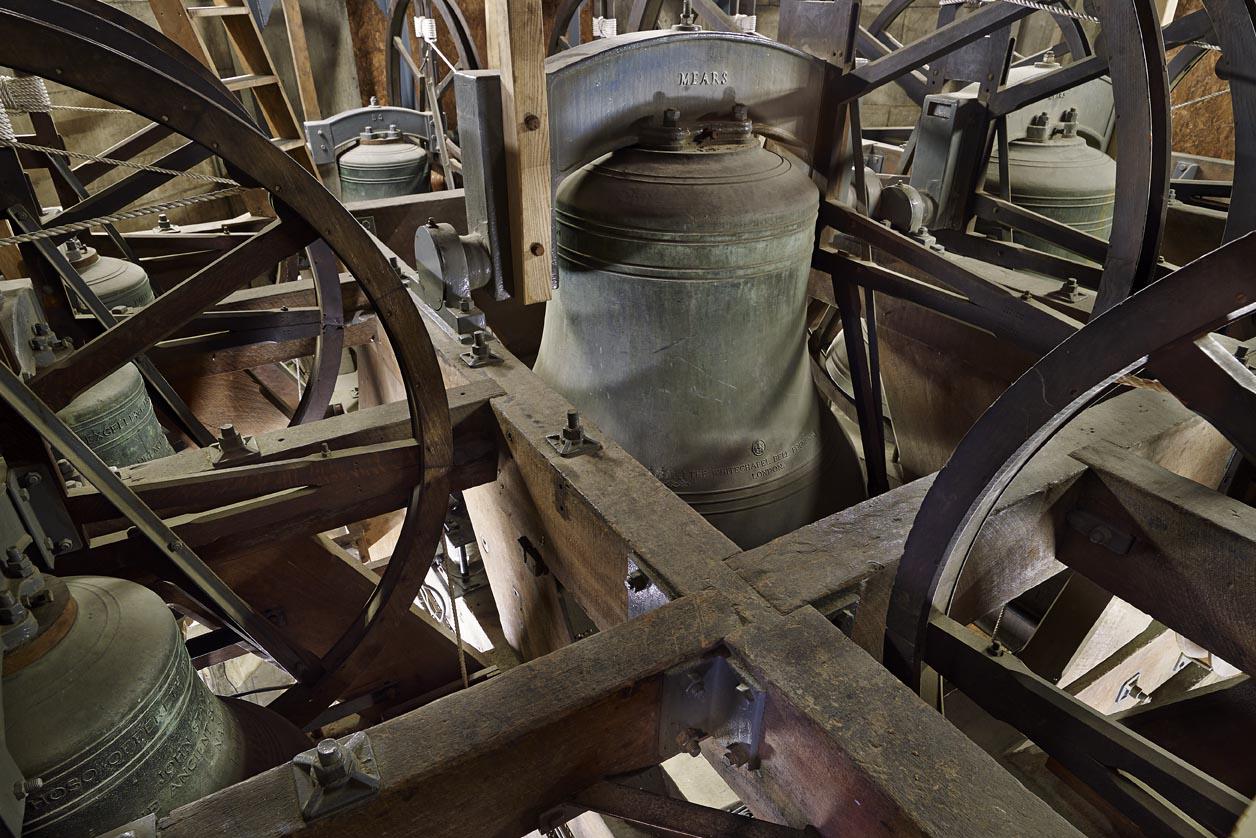 A brief History
by Mark Regan

Bow bells are probably the most famous in the world and for many hundreds of years have been woven into the folklore of the City of London. In 1392 Dick Whittington heard Bow bells call him back to London to become Lord Mayor; to be born within the sound of Bow bells was the sign of a true Londoner or Cockney; and Bow bell’s authority ends the medieval nursery rhyme Oranges and Lemons, ‘I do not know says the Great Bell of Bow’. During the Second World War the BBC’s World Service broadcast a recording of Bow bells, made in 1926, as a symbol of hope to the people of Europe. This recording is still used as an interval signal.

The first known reference to Bow bells is in 1469 when the Common Council ordered that a curfew should be rung at 9 o’clock each evening. Soon after this John Donne, a mercer, gave the church two houses in Hosier Lane (now Bow Lane) for the maintenance and regular ringing of the bells. In 1515 William Copland, a churchwarden, gave a great bell to the church making five in number. Sadly this bell was rung for the first time for Copland’s funeral. Ringing the curfew bell was stopped in 1876.

Bow church dominated life in the city and the 9 o’clock bell not only marked the curfew but also the end of an apprentice’s working day. The bell was often rung late prompting this rhyme:

‘Clarke of the Bow belle with the Yellow lockes,
For thy late ringing thy head shall have knockes’
To which they received the reply:
‘Children of Cheape, hold you all still,
For you shall have the Bow bell rung as you will.’

Ringing prospered in the seventeenth century and in 1603 the Society of Cheapside Scholars was founded. Fabian Stedman, the father of modern change-ringing, was a member. This society became extinct in 1662. By 1635 the tower contained six bells and in 1643 the bells were rung to celebrate the demolition of the famous Cheapside cross by a crowd of citizens and soldiers loyal to Parliament. The cross was seen as a symbol of Popery. There is a curious reference in the Bodleian Library in Oxford to Bow having twelve bells in 1652 ‘of which ten which were rung and two were tolled’. No evidence has yet been found to prove this claim. Samuel Pepys’ Diaries contain occasional references to Bow bells.

The tower and bells were destroyed in the Great Fire of London in September 1666. Although the new tower was designed for twelve bells the bellfounder, Christopher Hodson from Crayford in Kent, cast a heavy peal of eight for Wren’s new church in 1677. Thomas Lester began Bow’s long association with the Whitechapel bellfoundry when he recast the tenor bell in 1738. The other seven bells were considered inferior and recast in 1762 when two extra bells were also added. The ten bells were first rung to celebrate George III’s 25th birthday.

However the bells were often not rung because of problems with the tower, the bells, the bell frame or a shortage of ringers. In 1820 some stonework fell from the spire into the bedroom of a local merchant in Bow Lane nearly killing him.

In 1856 the bells were silenced by the protestations of Mrs Elisabeth Bird, an eccentric neighbour who feared that the noise of the bells might end her life. After two years’ silence the bells were rung again and Mrs Bird lived to hear the bells for several more years. Recordings survive of the original ten bells by Lester.

The bells were finally augmented to twelve in 1881 and in 1926 they were declared unringable and not rung again. The silence of Bow bells became a matter of national concern.

The restoration and recasting of Bow bells by Gillett and Johnston in 1933 was the gift of H. Gordon Selfridge, the American entrepreneur who had founded his famous store in London’s Oxford Street. This restoration divided ringers’ and public opinion for many years and it has never been proved whether or not Selfridge actually paid for the work. After being heard for only eight years these bells were destroyed on 11 May 1941 by a German air raid during the Second World War. The church deliberately omitted the date of this restoration when the bells were later recast.

The tower now contains a new peal of twelve bells that were cast at the famous Whitechapel bellfoundry in 1956. Salvaged metal from the destroyed bells was reused but the overall weight of the bells was reduced. These bells were rung for the first time on 21 December 1961. They hang 100 feet (30 metres) above the ground in a bell frame made of Javanese Jang. The smallest bell weighs 5 cwt (285 kgs) and the biggest or tenor bell weighs almost 42 cwt (2135 kgs). Each bell has an inscription from a Psalm or New Testament canticle on it, and the first letters of each inscription spell D WHITTINGTON. Much of the cost of rebuilding the tower and recasting the bells was the gift of the Bernard Sunley Charitable Foundation and Holy Trinity Wall Street in New York.

The bells are frequently rung. A group of bellringers working in or near the City rings for the church’s main services. The Ancient Society of College Youths, which was founded in 1637, still has a close association with the bells and its members regularly ring them. The other London ringing societies hold practices too, and ringers from all over the world have rung on the bells. Adjustable sound control ensures that the bells are heard for service ringing but are much quieter for recreational ringing. Little ringing takes place during the working day in consideration for our neighbours.

The first full peal of over 5000 changes was rung on 12 January 1731 by the College Youths. By 1939 only 65 peals had been rung in the tower. The first peal on the new bells was 5007 Stedman Cinques, again by the College Youths on 9 November 1962. Well over 300 peals have been rung on Bow Bells making St Mary-le-Bow the leading peal ringing tower in the City of London.

Thwaites and Reedes installed the electric clock mechanism in 1961 and Smith of Derby replaced the chiming mechanism in 1985. Its capabilities have subsequently been extended, and regular maintenance undertaken, but the Cumbria Clock Company . The unusual tune used to strike the quarters and the hour was composed by Sir Charles Villiers Stanford in 1904.

For many hundreds of years the bells of St Mary-le-Bow have proclaimed the church’s presence in the heart of the City of London and they continue to do so today.

Hear the Sound of Bow Bells

the present ring of 12 bells 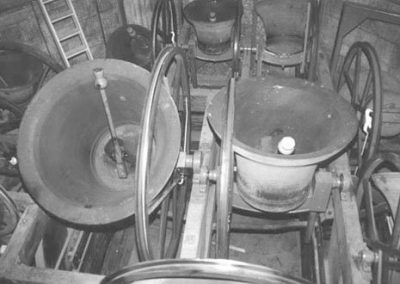 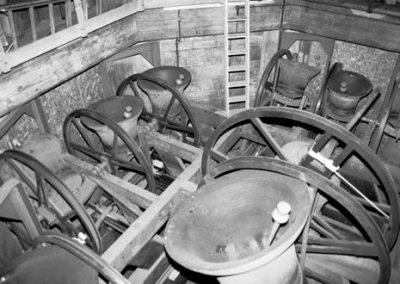 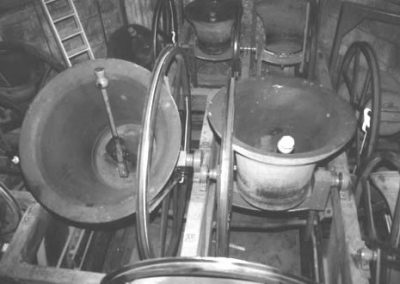 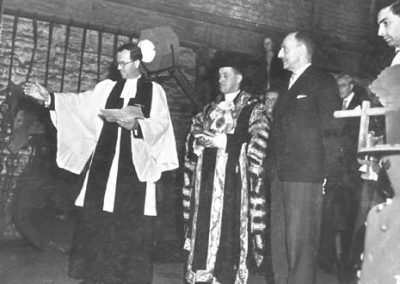 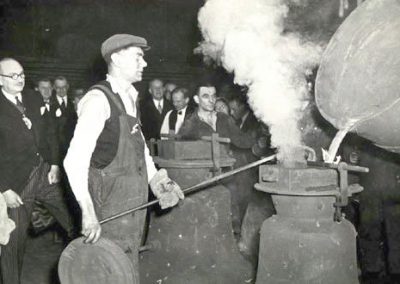 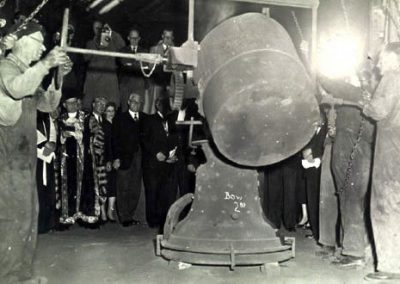 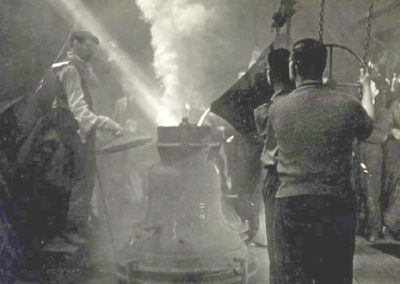 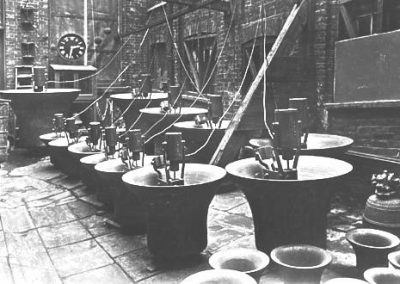 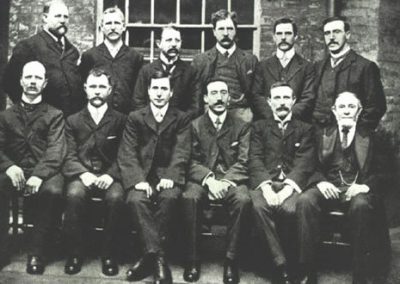 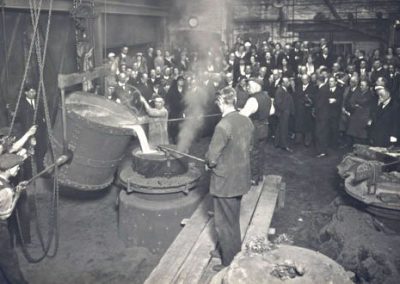 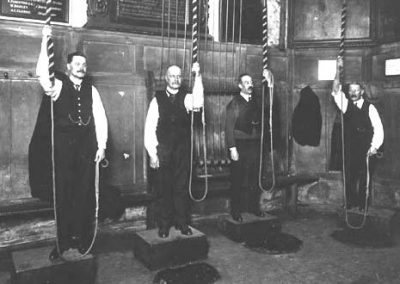 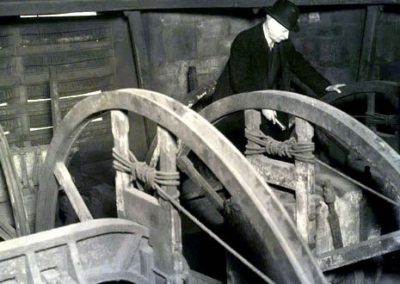 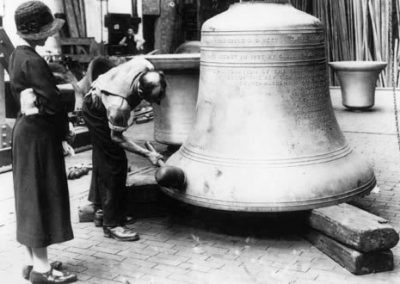 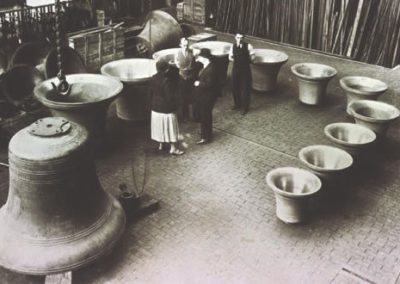 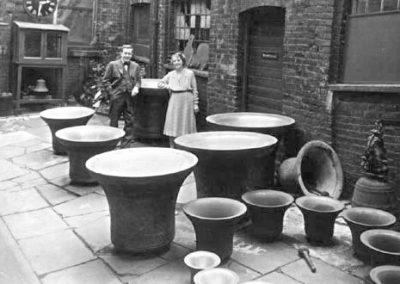 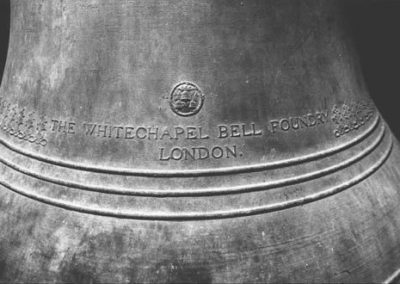 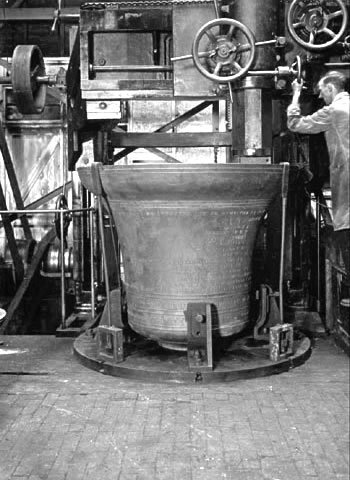 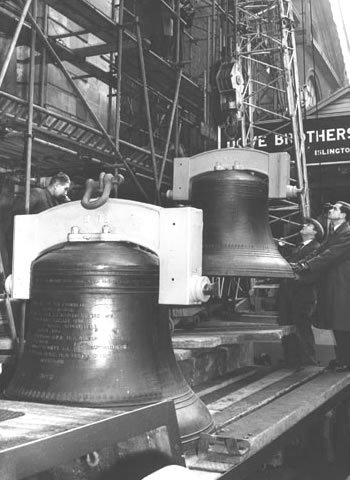 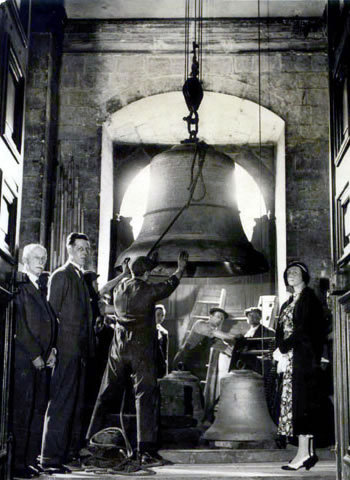 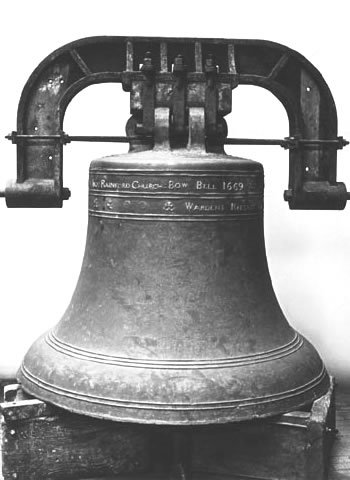 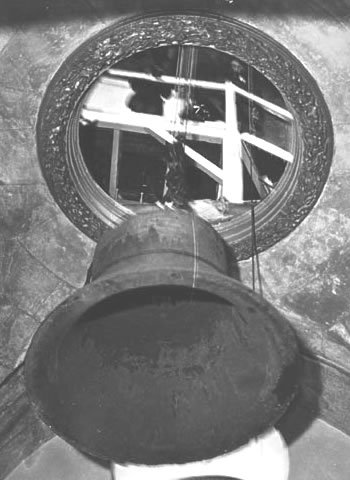 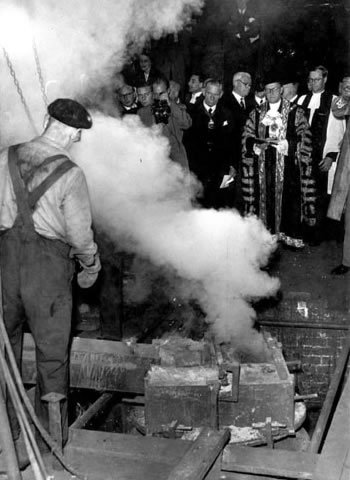 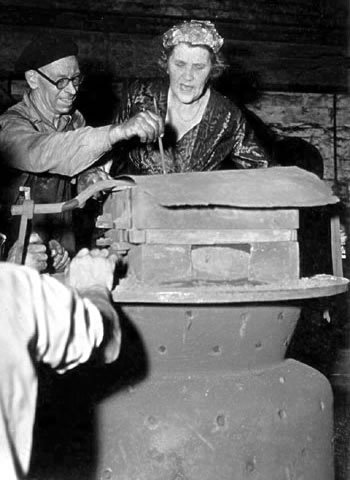 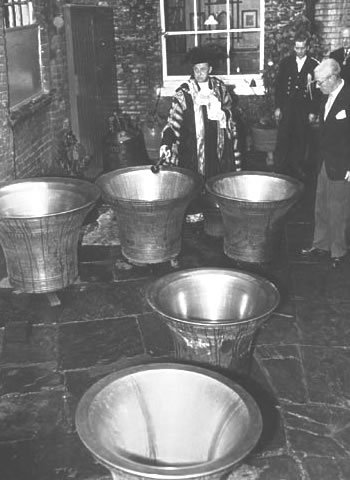