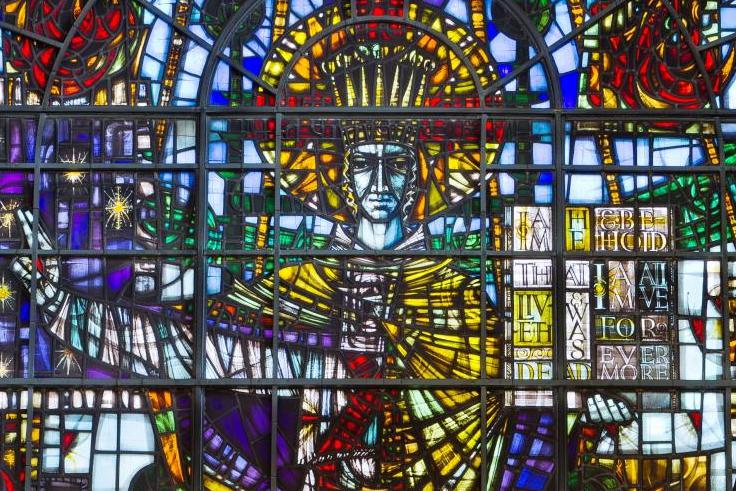 The Windows of St Mary-le-Bow

The windows of St Mary-le-Bow are among the most striking features of the building as restored in 1964. They, together with the other furnishings, vestments etc, were designed by John Hayward (1929-2007) who worked in Faithcraft, a firm which sought to bring the principles of the Liturgical Movement to fruition. The windows are signed (1963) by Hayward in the bottom left of the south east (right) window.

Prior to 1941 the windows depicted scenes from the life of the Blessed Virgin Mary. Hayward’s new scheme for the east windows encompasses a wall throughout; perhaps the wall of the heavenly city of the Book of Revelation or, of the City of London – or both! Above the three large windows can be seen – in some abstraction –  the sun and the moon and, in the centre, the all seeing eye of God, the Eye of Providence, at the apex. Hayward considered this eye to represent God the Father.

Christ in Majesty
The arrangement of the sanctuary before 1941 was a cut down version of an elaborate scheme for a reredos which dated from 1706, combined with an oil painting. This originally included seven gilded candlesticks at an attic level (suggesting the seven golden lampstands representing the seven churches in the Book of Revelation ; Hayward clearly alludes to this in the principal east window of Christ in Majesty in which seven stars are seen to emanate from the right hand of Christ (Revelation 1:20 – ‘the seven stars are the angels of the seven churches’). Hayward adds to this the seven flames around the person of Christ, representing the seven gifts of the Holy Spirit; wisdom, understanding, counsel, inward strength, knowledge, true godliness and delight in the fear of the Lord (gifts promised to candidates in the Sacrament of Confirmation). The main figure is of Jesus the Christ, vested as a priest and seated – he is God the Son, and above him hovers the heavenly dove, the symbol of God the Holy Spirit.

The Blessed Virgin Mary
To the north (left) of the sanctuary is depicted the Patron of the parish, the Blessed Virgin Mary, holding (and thus symbolising her care for us) the church built by Wren. She is clothed in blue (the traditional colour for Our Lady) and her feet appear to be resting on the arches of the crypt. Surrounding Our Lady’s image are seventeen Wren churches which survived the Second World War, each held by the patron saint of the parish.

St Paul
The south (right) window depicts the Patron of the diocese of London, St Paul the Apostle holding the sword with which he was martyred (he was beheaded in Rome in 67AD) and the book of his Letters which are to be found in the New Testament. He is turn is surrounded by 11 churches, together with the Cathedral, which survived the Second World War.

West windows
The windows to the West are largely secular in tone and iconography – but not wholly so, for they assert that the City of London is an intermingling of things sacred and secular.

The left window is dominated by the Great Seal of the Lord Mayor of the City, in red with its figures of St Paul and Thomas à Beckett (born in a house on the other side of Cheapside and martyred at Canterbury in 1170). Below the seal is the Mansion House, the residence of the Lord Mayor. The lower half of the window shows the coats of arms of six of the Great Twelve of the Livery Companies of the City: top (from left to right), the Skinners, the Vintners, the Merchant Taylors; bottom, the Haberdashers, the Ironmongers, the Clothmakers. The circular lunette above shows the Lord Mayor’s regalia; the chain of office, the seal, the fur hat of the sword bearer, the purse and, crossed behind –  the great mace and the pearl sword.

The right hand window shows the Common Seal in which the figure of St Paul is shown within the City walls, with the sword of his martyrdom in his right hand and the standard of England in his left. Below the seal is the Guildhall, the seat of government in the City of London and the further six coats of arms of the Great Twelve Livery Companies of the City; top (from left to right), the Mercers, the Grocers, the Drapers; bottom, the Goldsmiths, the Fishmongers, the Salters. The lunette above shows the arms of the City of London.

John Hayward considered stained glass to be for the glory of God and an aid to devotion. He signs his composition with the verse of George Herbert (1593-1633):

A man that looks on glass
On it may stay his eye;
Or if he pleaseth, through it pass,
And then the heav’n espy. 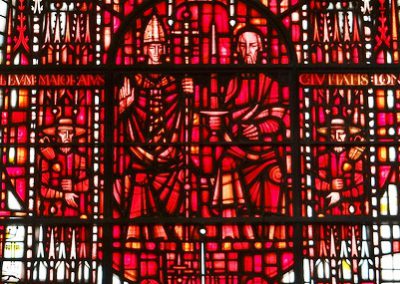 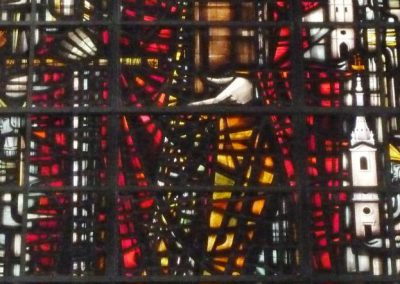 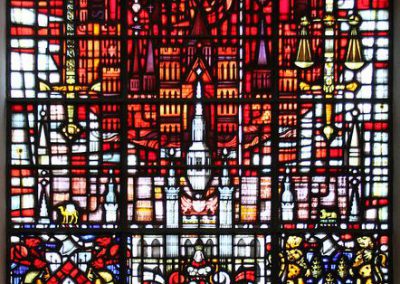 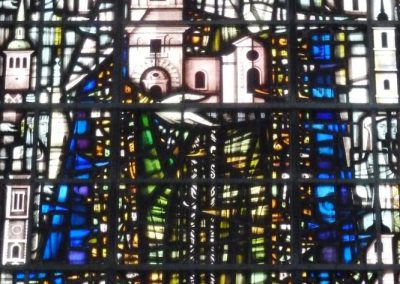 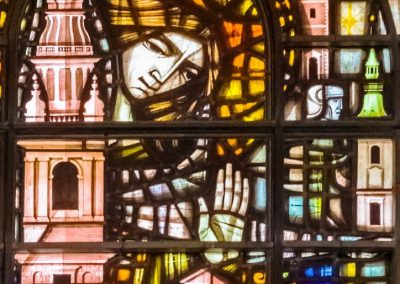 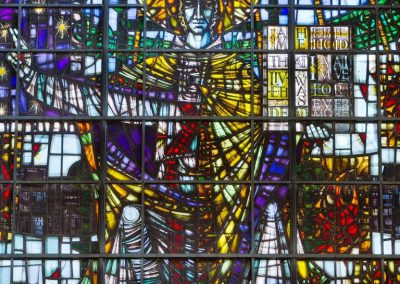