A limited-edition volume of historical essays on the church and parish of St Mary-le-Bow in the City of London is available now direct from the church.

Founded in or around 1080 as the London headquarters of the archbishops of Canterbury, the medieval church of St Mary-le-Bow survived three devastating collapses before being completely destroyed in the Great Fire of 1666. Rebuilt by Sir Christopher Wren, it was destroyed once more in 1941 but was again rebuilt and re-consecrated in 1964.

Topics covered in this 300-page volume include:

+ an overview of the church’s 925-year history
+ its status as the Archbishop of Canterbury’s principal ‘London Peculiar’
+ the crypt
+ the medieval church
+ Bow Church: the wider context
+ the Reformation
+ the Court of Arches at St Mary-le-Bow
+ Wren’s rebuilding of St Mary’s in the 1670s
+ Reforming Societies in the early 17th century
+ the church’s silver collection
+ the Boyle Lectures
+ links with Trinity Wall Street in New York City
+ rebuilding the church in the 19th century and after the Second World War
+ St Mary-le-Bow’s eight ‘other parishes’
+ Bow Bells
+ the future.

The Worshipful Company of Grocers has provided very welcome financial assistance for this project.

A limited number of copies are available for purchase. Price: £42 (includes p&p within the UK) or $90 (includes p&p and a handling charge for postage to the USA and Canada).

You may also purchase copies in person for £35, using cheque, cash or online transfer, at the Vestry between 11.30am and 4.00pm Monday to Friday. 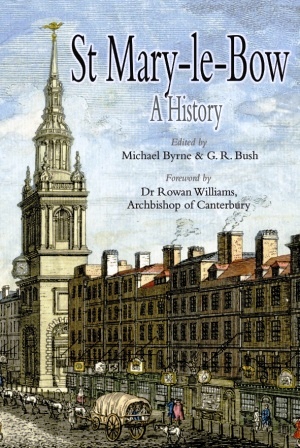 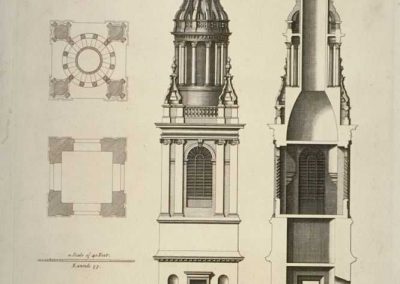 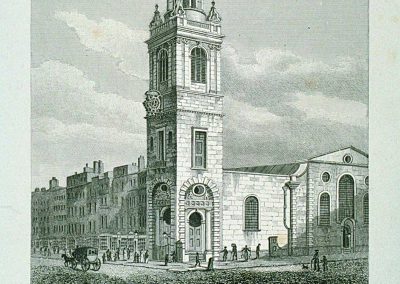 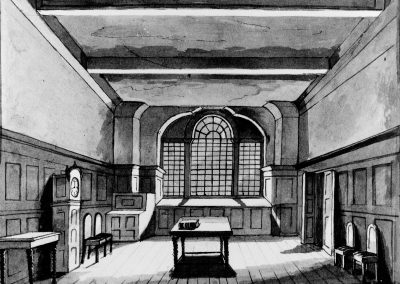 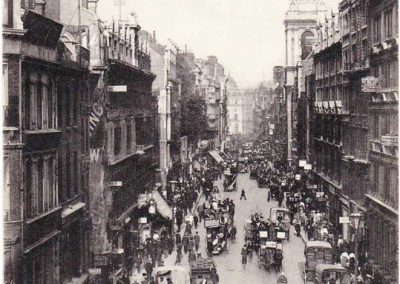 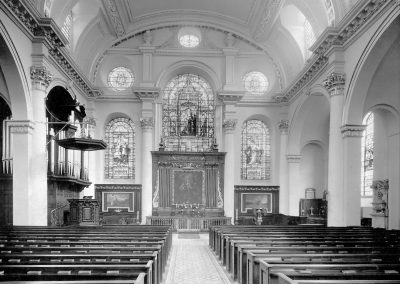 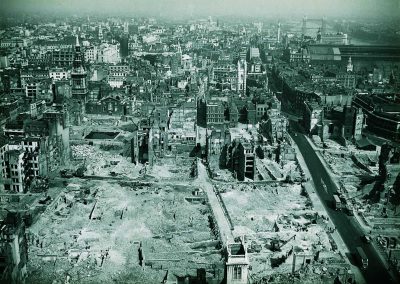 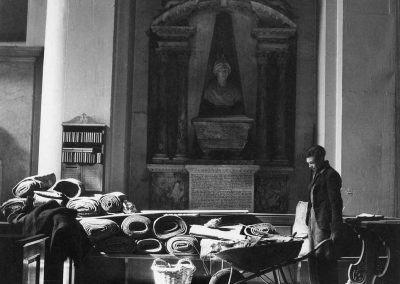 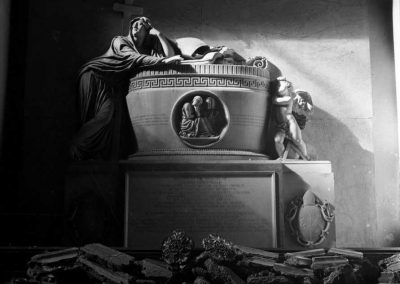 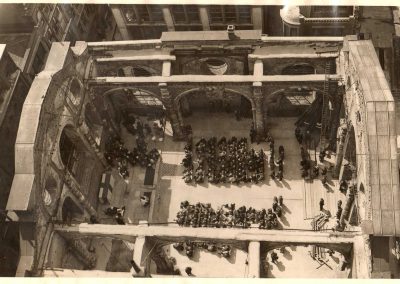 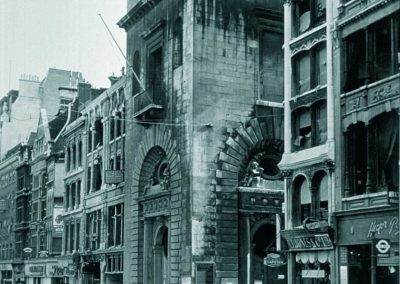 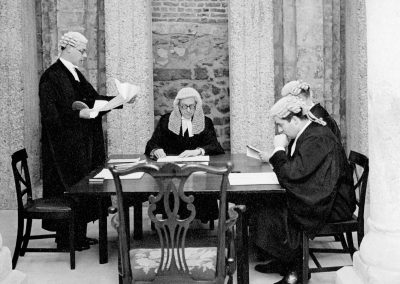 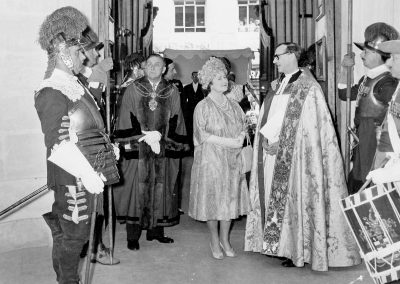 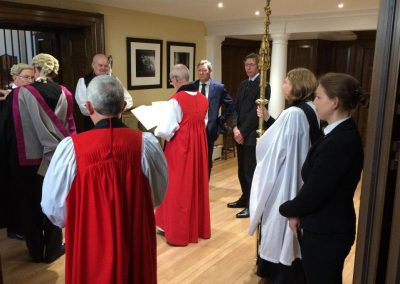 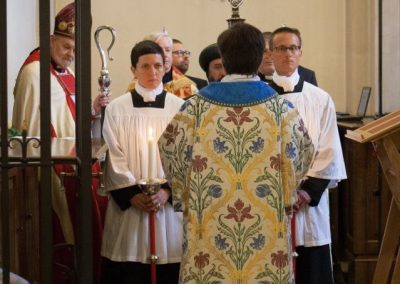 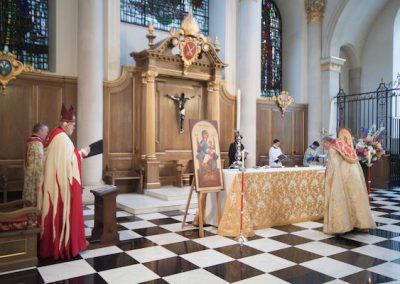 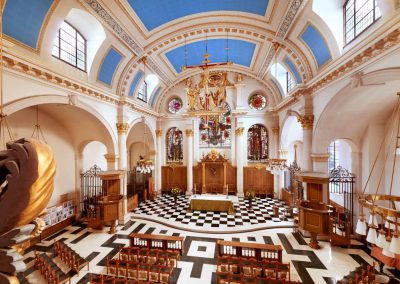 One thousand years of history

St Mary-le-Bow was built c.1080 by Lanfranc, William the Conqueror’s Archbishop of Canterbury who accompanied him from Bec in Normandy. The Norman church – which may possibly have replaced a building of Saxon origin – was part of a policy of dominating London and was constructed out of the same stone as William’s Tower of London imported from Caen; perhaps by Gundulf, Bishop of Rochester and architect. The new St Mary-le-Bow may well have been cheerfully disliked by the citizens of Cheapside as an object of oppression.

The present day crypt – although much altered and fragmentary – gives an idea of the structure (two aisles and a nave) , only partially underground which medieval Londoners will have known. The ‘le-Bow’ or ‘de arcubus’ may perhaps refer to the Norman arches which were something of a novelty. But the crypt was really an undercroft, a subsidiary structure upon which the upper church rested. Of that interior no reliable image (before the Great Fire) survives.

We know that the church included an image of Our Lady, painted and crowned by a legacy in 1348 and altars to St Nicholas, St Agnes, St Thomas Becket (a parishioner), St Katherine and the Holy Trinity. From c.1251 St Mary-le-Bow was the home of the final appeal court of the southern province of the Church and would have been alive to the buzz of clergy and canon lawyers. Although that use fell into desuetude, it seems that Wren, rebuilding after the great fire intended his Vestry for the Court room, and the use of the church for such sittings and ceremonies has been revived in recent decades.

Before the Great Fire there were three significant building projects on this site:

+ A substantially new church built after a fire in 1196, which may well have replicated what had been destroyed

+ The reconstruction of the tower (on the south-west corner) after its collapse into the street in 1271; not completed until 1512

St Mary-le-Bow was thrown into great prominence because it possessed the principal curfew bell, rung at 9pm each day from at least 1363 and because it was the Archbishop’s principal ‘peculiar’ (i.e. although in the middle of London it was in fact in the diocese of Canterbury and remained so until 1850) – and hence the Court of Arches. The sound of Bow bell is that which distinguishes an area in which ‘Cockneys’ are said to be born.

Although the famous pre-fire tower was at the south end of the site and not on Cheapside as suggested in some illustrations, St Mary-le-Bow was with St Paul’s the backdrop for jousting and processions (every monarch or consort until James II processed along Cheapside to their coronations).

At the Reformation, St Mary-le-Bow was at the forefront of the changing times and ideas and one Rector, John Joseph, who later managed to escape the cruelties of Queen Mary Tudor systematically denuded the church of all its statues, vestments, candles and a ‘pair of organs’. Yet it was here that Reginald, Cardinal Pole became ‘Catholic’ Archbishop, although the church was so bare that it had to be hung with ‘gold and arras’ on Lady day and the Roman obedience was briefly restored to England.
After the Great Fire an attempt was made to shore up the old tower, which must have been well loved, but Sir Christopher Wren had the ambition for his second (after St Paul’s) tallest structure by moving the tower to the street and, it seems recalling the old royal box on Cheapside with a balcony high up on the north façade.
Wren had little interest in the crypt – which he seems to have thought was Roman – and simply encouraged its use as a burial chamber. The only access was by a trapdoor and ladder until George Gwilt built the present staircase. A fragment of the medieval staircase – perhaps into the first tower – can be seen in the north west corner of the crypt.

Wren’s design for the upper church took into account the need for a preaching room, rather than a place for Catholic ritual. It was almost completely destroyed by enemy action in May 1941 and not rebuilt (the fourth church) until 1964 by Laurence King, a good part as the London home of the Liturgical Movement.